But then came the Great Certificate Expiration of 2019 which caused them all to simply stop working after October 24. (They would still boot, but the installer would claim it was damaged and refuse to proceed unless the system’s clock was backdated beforehand… and even then it wouldn’t always work for me.) But as Apple has since deigned to re-sign and post installers for Yosemite and later, I figured it was time to rebuild my universal installation drive from scratch, and record the process.

I’ve left the installers for 10.7, 10.8, and 10.9 off of this second iteration as re-signed versions of those weren’t posted, and because I like round numbers. I’ll probably dedicate an older hard drive to those later for my vintage Mac futzing.

It’s possible to minimize the unused space on the drive by shrinking each partition after its installer has been loaded. I started by opening Disk Utility, selecting View > Show All Devices, selecting the inserted drive, and erasing it as “Mac OS Extended (Journaled)” using “GUID Partition Map”. Then for each OS X/macOS version, I would:

This was my drive after a few rounds: 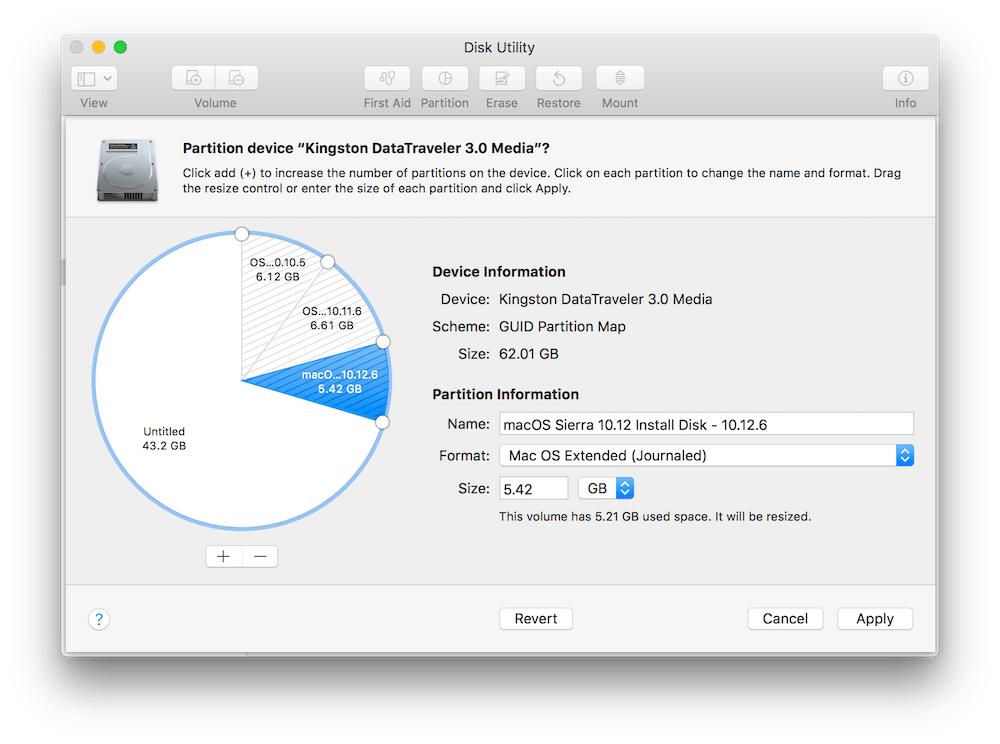 I did find DiskMaker X 6 would occasionally skip setting a partition’s Finder window background, but this can easily be rectified by locating the appropriate background image within the app’s Contents/Resources/ directory and applying it via Finder’s View > Show View Options.

With the Sierra installer, I ran into an issue where DiskMaker X would fail with the following error:

after which DiskMaker X should run without issue.

Evidently, something within the reissued installer wasn’t updated to account for the new version number. As of this writing, this Apple support page is still serving the affected installer from this URL. I’ve used their feedback form to raise the issue with a link back to this post. (Update 2022-03: Looking at this Apple support article, it appears they’ve fixed the problem the Apple Way™ by removing all references to the Sierra installer.)

Holding the Option key when powering on an Intel Mac brings up the EFI-based Startup Manager interface, which shows icons and names for all attached bootable volumes. When testing my completed drive, Startup Manager was showing all six partitions, but the ones for macOS 10.13 and later were only showing generic icons. I did some investigation, and what did I find? Yep, more macOS bugs.

A volume with a custom icon will have a hidden .VolumeIcon.icns file at its root. This file is in the ICNS format, which defines this list of image size specifications that such a file can contain any number of. Finder will display the largest size available in the file, but Startup Manager on a Mac with a non-Retina screen will display only the it32 size (128 x 128 @ 72ppi), while a Mac with a Retina screen will prefer the ic08 size (256 x 256 @ 72ppi) if available, falling back to the it32 size if not.

Opening each file in Preview (e.g. open "/Volumes/<volume name>/.VolumeIcon.icns" in Terminal) will show those files don’t contain Startup Manager’s required sizes. To fix, you could retrieve the custom volume icon from a ZIP archive contained within each DiskMaker X application’s Contents/Resources/ folder, open it in Preview, copy, and paste into the icon of each volume’s Get Info window. This will automatically generate a .VolumeIcon.icns file containing several sizes. (It also enables the custom icon flag for the volume, which you can set yourself with SetFile -a C /Volumes/<volume name>.)

But! You’ll get different results depending on which macOS version you’re running:

This is why a custom volume icon pasted from an image using macOS 10.13 or 10.14 will not show in Startup Manager on any Mac, and if macOS 10.15 is used, it will show only on Retina display Macs. (Note that if you’ve copied a custom icon from another file using Finder, it will transfer all sizes of the original icon when pasting, rather then generating a new set of sizes.)

So, if you want to create your own volume icon file with the proper sizes and don’t have a pre-High-Sierra Mac on hand, you can still do so with iconutil.

Changing the name of a partition

If you change a boot partition’s name in Finder, you might notice that this change isn’t automatically reflected in Startup Manager. This is because the name it shows is actually an image that’s pre-generated by the bless command. You can customize the text by running bless manually, but to have it simply mirror the volume’s name in Finder, it’s quicker to:

Doing so updates the .disk_label and (for Retina displays) .disk_label_2x files in the partition’s /System/Library/CoreServices/ directory.

It’s worth noting that a firmware update that shipped with macOS High Sierra added /.IABootFiles as a location for those files, but my testing didn’t find any cases where that posed an issue.

Because it can take a while for macOS to properly unmount all the drive’s partitions when ejecting, I’ve prevented them from automatically mounting on my Mac by adding their UUID values to /etc/fstab. Using each partition’s Volume UUID from diskutil info "/Volumes/<volume name>" | grep "Volume UUID" or System Information’s Hardware > Storage, I added several lines of UUID=<UUID> none hfs rw,noauto to /etc/fstab and then ran sudo automount -vc to make the edits take effect.

Feedback? Open an issue on GitHub.